London, 15 January 2020 – Greenpeace and Aardman, the award-winning creators of Wallace & Gromit, have today launched a powerful new animated film highlighting the plight of the world’s oceans.

Turtle Journey tells the heartbreaking story of a turtle family heading home through an ocean that is under increasing pressure from climate change, plastic pollution, oil drilling and overfishing.

Louisa Casson, oceans campaigner  at Greenpeace UK, said:
“Our oceans are in crisis, with six out of seven sea turtle species threatened with extinction. Aardman’s global popularity and distinctive blend of humour and emotion can bring this message to people around the world, spurring bold action to protect the oceans.

“Governments have an opportunity to take bold action at the United Nations this year when they meet to agree on a new Global Ocean Treaty. A strong treaty would pave the way for a global network of fully protected ocean sanctuaries, placing 30% of the world’s oceans off-limits to exploitation by humans and giving marine species such as turtles a chance to recover and thrive.”

Turtle Journey ends with a call to action, urging viewers to sign Greenpeace’s petition calling for a Global Ocean Treaty.

Olivia Colman, voicing the turtle family’s mother, said:
“Home is the most important thing we have. A safe space for us and our family to live. But we’re taking that away from turtles, whales, penguins and so many other incredible animals. Most of us instinctively love the oceans and care about the amazing marine life that lives there, but far fewer people know how much pressure they are under. If we don’t act now we risk causing irreversible harm to our oceans and losing species for good.

“I’m thrilled to have worked on this heartbreaking film with Greenpeace and Aardman – it’s so important. Our oceans face so many threats, some I wasn’t even aware of before this, and sadly the story of this turtle family trying to get home in a damaged and changing ocean is a reality for so many marine creatures that are having their habitats destroyed by human activities. I hope this film inspires more people to take action to protect our oceans.”

Dame Helen Mirren, voicing the turtle family’s grandmother, said:
“During my lifetime, I’ve seen nature being destroyed on an unimaginable scale by human activity. I’m saddened that our generation will leave to future generations a damaged planet, which has already lost so much of the biodiversity that makes it special. However, we have a chance to do something now and leave a legacy of properly protected oceans to all the people who come after us.

“We can’t bring back what we’ve already lost, but we can protect what we still have. I hope this film will help to make more people realise the ocean is worth protecting, and inspires us to act before it’s too late.”

Turtle Journey is available to watch under embargo here. This link will become public after the embargo lifts.

In April 2019 Greenpeace released 30×30: A Blueprint For Ocean Protection, a groundbreaking study by leading marine biologists which mapped out how to protect over a third of the world’s oceans by 2030, a target that scientists say is crucial in order to safeguard wildlife and to help mitigate the impacts of climate change.

Gavin Strange, the film’s director, said:
“I wanted to tell a personal yet universal story of family, loss and hope to best connect with audiences around the world. It was an absolute dream to work with such a talented crew of animators, artists and creators here at Aardman, manipulating clay and pixels to make such a nuanced and delicate piece of animation. Brought to life by a stellar cast of world-class voice talent, topped off by a simply sublime score from Arthur Jeffe’s Penguin Cafe and with Greenpeace’s hard hitting call to action, I am immensely proud of what we’ve all made together.”

Bella Ramsey of Game of Thrones, voicing the turtle family’s daughter, said:
“When I’m older, what will the oceans look like? I want my generation and every future generation to experience healthy, thriving oceans that are full of life and are a safe home for beautiful and important creatures like turtles. But I’m worried this won’t be possible. In my short lifetime, our ocean has already been damaged on a scale many people didn’t think possible when I was born.

“We need to act, or it will be too late. Future generations will be living out the consequences of what we do, or don’t do, right now. Will governments sit idly by while our oceans are destroyed, or will they leave a legacy of healthy, protected oceans that can be admired by all, now and in the future? The eyes of the world and of all our descendants are on our governments. We, individually, need to play our part but they, collectively, must act now to create positive, lasting and dramatic change. Don’t just listen, do something about it”

“This heartbreaking story of a turtle family trying to get home through an ocean in crisis should resonate with anyone watching it. We all live in a world that has been changed enormously by human activity, and this reality is as true for marine animals like the turtles in Turtle Journey as it is for us humans on land.” 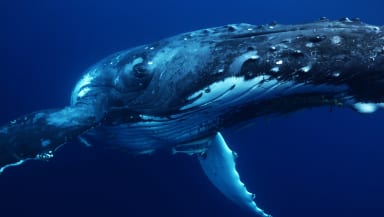 Why whales are climate change heroes

Let’s be honest – whales are awesome. As the biggest animals in the ocean, they need space to feed, breed and thrive. But only recently have we realised just how much our oceans also need whales, especially in the face of climate change. 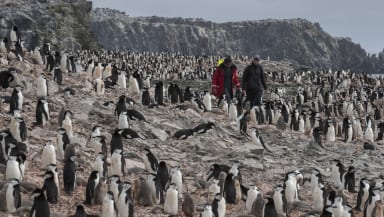 Antarctic penguins are in trouble. Here’s how we can help them

Scientists are braving the freezing conditions of the Antarctic to count chinstrap penguins. But it’s not looking good – average numbers have dropped by around two-thirds since they were last counted in the early 1970s. Lobbying for ocean sanctuaries could help them recover. 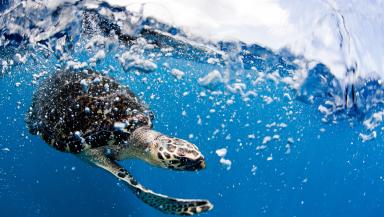