This morning, BPs oil rig, that was heading back towards land overnight, turned to go back to the oil drill site in the North Sea where it plans to drill for 30 million barrels of oil. Then, at 10.30am this morning, it turned for the second time and is now heading back to land.

Greenpeace is now following the 27,000 tonne oil rig back to land.

Greenpeace has now successfully stopped BP from drilling a new oil well for nine days. Climate activists held the rig in Cromarty Firth for seven days from Sunday 9 June until last Friday. On Saturday the Arctic Sunrise arrived to pursue the oil rig as it was towed out to sea.

Sarah North, Greenpeace International climate activist on the Arctic Sunrise, said: “We are determined to stop BP drilling new oil wells in the North Sea. The ball is in BP’s court. Will they continue with their climate wrecking plan or wake up to the climate emergency that we face? We’re calling on them to act with leadership by transitioning to 100% renewable energy in response to this escalating global crisis.”

Eleven Greenpeace activists have been arrested so far, five will appear at Tain Sheriff Court today, charged with breach of peace. Three freelance photographers were also arrested but subsequently released.

Despite BP claiming that its business is compatible with the Paris climate agreement, Greenpeace argues BP’s operations are in direct opposition to efforts to prevent catastrophic climate change. Evidence for this includes:

Pictures of the Arctic Sunrise and the rig occupation here 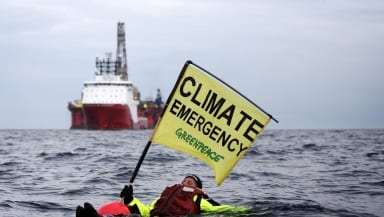 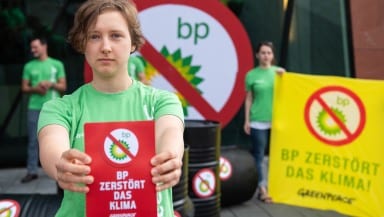 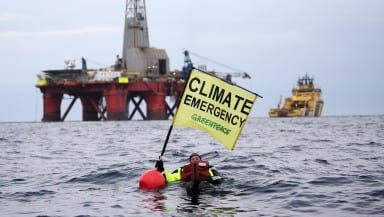