During Black History Month, we celebrate US voting rights and food justice activist Fannie Lou Hamer. As well as famously advocating for civil rights in the 1960s, Hamer was a pioneer of grassroots farming cooperatives which have continued to inspire 21st century urban agriculture collectives.

Born in Mississippi in 1917, Hamer was the youngest of 20 children. From the age of six, she picked cotton with her family who worked as sharecroppers on a plantation. Hamer would eventually become the plantation’s time and record keeper.

In the 1960s, Hamer got involved in the civil rights movement. At the time, many Southern states had enacted legislation like poll taxes and literacy tests that disenfranchised black voters. As an activist, she would frequently sing African-American spirituals like This Little Light of Mine during protests.

Although Hamer was quite well known for her work as a voting rights activists, she was also a food justice pioneer. During the late 1960s, the civil rights movement focus shifted towards economic justice. Hamer advocated communal farming as a possible solution.

She formed the Freedom Farm Cooperative in 1969 with Harry Belafonte in Wisconsin. The initiative provided poor families with food and farmers land to work and food to eat. Over 1,500 families were members of the co-operative that grew everything from cucumbers, soybeans, cotton and collard greens. The project accepted zero funding from the federal government and was 100% lead by grassroots activists.

Unfortunately during this same time, lots of factories were opening up in large northern cities across America. There was also a significant decline of farming work in the south as machinery began to replace the work of humans working the land. As a result, the Freedom Farm Cooperative struggled to compete with other farms in the area and eventually closed.

But Hamer’s legacy lives on today. After the financial crisis of 2008 and the steady decline of the American automotive industry, cities like Detroit became ghosts towns. Many lost their homes and entire neighbourhoods became lined with empty properties adorned with foreclosure signs.

Over time, these homes were demolished and empty lots stood in their places. In the spirit of Fannie Lou Hamer, the local communities groups like the Georgia Street Community Collective have reclaimed the land. The site of former homes have now turned into an urban farms fit to feed the whole community.

Similar urban farming schemes have popped up in other cities like Los Angeles which is home to Ron Finley, the self-styled ‘gangsta gardener’. In a popular TED Talk, he spoke about the 26.5 million Americans that live in food deserts, an urban area where it is difficult to buy affordable or good quality fresh food.

As a solution to the lack of affordable and healthy food in his home of South Central Los Angeles, he and his group LA Green Grounds began to plant fruit and veg in any free space of land they found. Called guerrilla gardening, they successfully used this tactic to not only feed their community but to also train young people in agriculture.

Fannie Lou Hamer’s work neatly bridges the civil rights and environmental movements. We could learn a lot from her example as we strive to find ways to build a mass movement to fight climate change.

Tisha Brown is an oceans campaigner at Greenpeace UK. She has campaigned with both the environmental and anti-racism movements and is interested in the ways they intersect.

Fossil fuel companies are agents of oppression. They continue with business as usual, knowing their business is contributing to the climate crisis, which has the greatest impact on people of colour and those in poverty. This is why I chose to intervene directly in BP’s plans to drill for new oil. 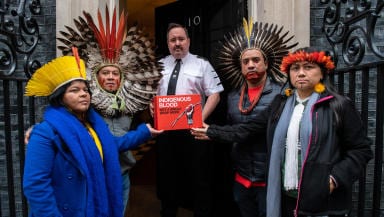 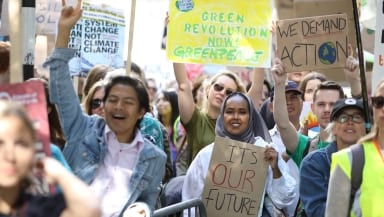 Greenpeace petition, signed by more than 100,000 people, calls for a national televised debate on the climate and nature emergencies with all party leaders